Angel Abaddon – also called Abbadon or Apollyon (in Greek). Firstly, his name means “The Destroyer”. He is one of the Angels of Death. Rabbinic teachings consider Abaddon a place, not an angel. They call Abaddon a region of Hell. 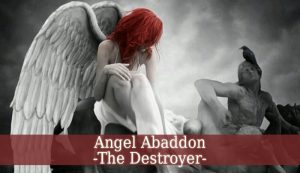 Angel Abaddon is one of the angels of death. Most cultures consider Abaddon a demon or fallen angel. Often mistaking him with Satan or Samael. He is also known as the angel of abyss. Also, Abaddon is the destroyer and the destruction. He overseas the destruction of every being alive on Earth. Angel Abaddon has his servants. These servants are allowed to torture human beings and their souls. But they are not allowed to kill anyone. Many cultures mistake him with Satan himself. But more often, he is just a subordinate of the ruler of hell.

His name appears frequently in the Revelation. It describes Abaddon as the angel of the bottomless pit. It also mentions the celestial being as the angel who binds Satan for one thousand years.

The Dead Sea Scrolls also mention mention Abaddon’s name. It speaks of the “Sheol of Abaddon”. And they also mention the torrents of Belial, which burst into Abaddon.

The Biblical Antiquities of Philo (the 1st century apocryphon). Mentions Abaddon as a place, as a region of hell, not as a demon or angel. He is referred to as a place also by Milton. Who calls Abaddon the pit of hell. He appears as a place also in Rabbinic texts and even the Old Testament.

The first person to refer to Abaddon as a creature is St. John. Also, Job mentions Abaddon twice. First in Job 26:6 he mistakes the angel with Sheol. Then in Job 28:22 mentions Angel Abaddon and The Death together. Showing them as similar.

Agrippa mentions Abadon’s name as the prince of the 7th hierarchy of demons. They are called Furies. And they govern powers of evil, war, discord and destruction.