Angel Azael – Also called Azazel, Asiel or Assiel. Firstly, his name means “Whom God Strengthens”. And he is a fallen angel. 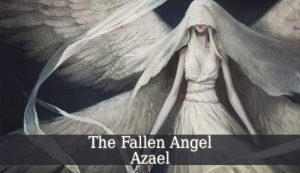 In The Zohar, Azael’s name is mentioned alongside with Aza’s, as the two fallen angels who live together with Naamah, the patron of prostitution and the daughter of Lamech. They also sired the Assyrian guardian spirits called Sedim. The Zohar, III 208 also mention Aza and Azael being chained to the mountains of darkness. But in I 37 they have a different fate. They rebel against God. And they are cast away from Heaven. Then they come down to earth to teach humans different kinds of black magic and sorcery.

The Dictionaire Infernal mentions the fate of the demonic angel. It explains that Azael is chained in a desert. And he will be there until the day of judgment.

Angel Azael is also present in The Midrash Petirat Mosheh. The texts describe Azael and Ouza as two holy angels who come to Earth. The become fallen angels because they are corrupted by humans and other fallen angels. 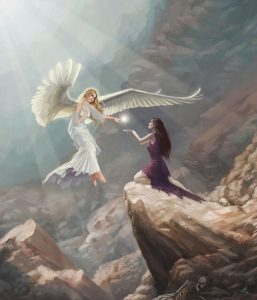 Cornelius Agrippa also talks about Azael. He presents a list of four evil angels who represent the opposites of the four divine elements. Angel Azael is one the four demons.

In “Vocabulaire de l’Angelologie”, Schwab describes Azael as the guardian of hidden treasures.

In Enoch 7 Azael is mentioned with Samiaza in his story about angels mating with women. Where Samiaza is the leader of the group of angels who create the Nephilims. And Azael is one of the angels leaded by Samiaza. The two angels were mentioned as Nephilims themselves for a long time due to a incorrect translation of the word.

Angel Azael is a fallen or evil angel, such as Sariel. For your own safety, don’t invoke or pray for him. He might be chained away the rest of humanity. But he might very well walk among us and patron witches and those interested of black magic. 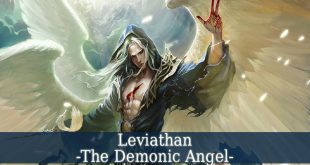