Angel Gadriel – often mistaken for Gadreel the fallen angel. Firstly, his name means “Wall Of God”. He is the chief ruler angel of the 5th Heaven. Angel Gadriel is the divine angel of prayers. Because he transports the prayers from the 5th Heaven to the 6th. 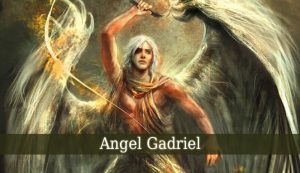 The Zohar, more specifically Exodus, describe Gadriel as the angel who takes care of the prayers ascending to the Heaven. He crowns these prayers. And then accompanies them to the 6th Heaven. Such as Sandalphon does. But Sandalphon transports the prayers from men to God. Not between two heavens.

In The Book Of Enoch, Gadriel (as Gadreel) is described as a fallen angel. Being the angel who leads Eve astray. Gadriel is also the angel who teaches mankind to build weapons. And to start wars. Gadriel himself is the starter of wars between nations. Becoming the demon of war. And evil warrior.

The Covenant of Mount Hermon mentions Gadriel (as Gadreel) as the 3rd of 5 so called “Satans”. He was against the angels who started relationships with humans. One of whom was Azael the demon. And he was against their children, the Nephilims. He even killed some of these Nephilim babies. For his action, he was banished from the Grigoris by the other fallen angels.

Gadriel is the divine angel of prayers. He is in charge of the prayers that ascend to the Heaven. So he protects and accompanies those prayers to the higher (6th) heaven. Gadriel holds sacred knowledge about the importance of prayer and contemplation. He teachers you how to pray properly. Gadriel gets your prayers closer to God.