Archangel Azrael – Also known as Azriel, Azariel, Azrail, Ashriel or Sariel. Azrael is the Angel of Death. And his name means “The Vow Of God” or “Whom God Helps”. Azrael is one of the 7 archangels of the earth. Who possess dominion of the physical world.

Archangel Azrael is the guardian angel of the dead ones. But he often shows himself to those who are dying. Azrael usually takes forms that please the dying. Due to the pleasant form of the angel, the dying one takes his last breaths being astonished by the beauty. The dying will fall in love. And his soul will detach from the physical body more easily, by being seduced by the beauty of the angel. 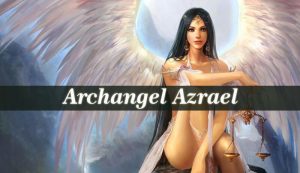 But Azrael don’t always make himself seen physical. He often makes himself felt in other forms, such as a fragrance or smell. Therefore, if the dying one was a good man, he will feel a pleasant fragrance. But he was a bad man and did many evil acts, then the smell will be awful and bad. As the Sufi teacher Abdul Karim Jili explains.

Archangel Azrael appeared to at the dead bed of Rumi. He materialized to every people in the room, not only to Rumi. The people were terrified buy the angel. But Rumi was calm and invited Azrael inside.

The physical description of the Archangel is terrifying. He has 70,000 feet, 400,000 wings . And he has eyes and tongues for each people on earth. So the number of eyes and tongues he has is equivalent with the population of earth. Others depict him with a large Book Of Life. He often writes into it and erases from it. Every time he writes into it, someone born. And every time he erases something, somebody dies.

Archangel Azrael appears in many cultures and beliefs. For example, in Islam and Judaism, Azrael is the angel of death. The sacred scriptures of these two religions depict Azrael as the angel who is responsible separating soul of the dying from his physical body. He stays with his arms stretched, to receive the souls of the dying.

Also, in the Koran, he is listed as one of the 4 archangels. The other 3 being Jibril, Michael and Israfil. Even the prophet Enoch mentions Azrael. Enoch lists him as one of the Angels of Destruction. Also known as “Swords of God”. And Azrael has two major responsibilities as described by Enoch. To punish the wicked. And to purify the souls of those in Hell. And he also participates to judgment of the souls, facing God on the Judgment Throne.