Archangel Michael also known as the Divine Warrior. Due to the fact that his first responsibility consists of leading the Heaven’s Army of angels. First of all, the name Michael means “He Who Is Like God”. Archangel Michael posses other name such as “One of the chief princes” or “The Great Prince”. Also, he is courageous and powerful. Therefore, he can help you deal with your fears and phobias. The artistic representation of Michael often consists of a strong man with a sword, an armor or a scale. Because these 3 objects represent his strength, courage and integrity.

1. First of all, his main responsibility in The Garden of Eden was to keep his eyes on Adam and Eve. Archangel Michael also teaches Adam how to farm. And he is the one who persuades God to let Adam’s soul to go to Heaven when he dies. Also, you can find out more about this in the apocryphal Book of Adam and Eve.

2. In the Testament of Abraham, Michael is described as the angel who guides our souls to the next world. Therefore, Micheal was the one who told Abraham that he is going to die. The archangel also took Abraham on a tour around the world as a result of his last wish. 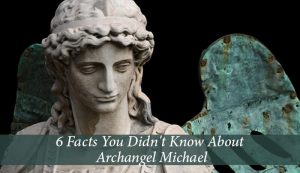 3. An angel who called himself “Angel of the Lord” appeared to Sarah, Abraham’s wife. This angel is believed to be Michael. He delivered the miraculous message that Sarah bears a son.

4. At the age of only thirteen, Joan of Arc was hearing and also seeing Archangel Michael. He didn’t only guide and encourage her, but also suggested the flag she carried.

5. The Virgin Mary appeared to four kids in Garabandal, Spain. She was telling them to change their way of living and also to attend church more frequently. Four years later, the four children experienced another appearance. It was Michael. He repeated the Virgin Mary’s message. But he also explained to them that they can have anything as a result of their praying.

6. Pope Leo XIII had a vision about Archangel Micheal. He battled Satan and sent him back to Hell. As a result of this vision, Pope Leo XIII wrote the famous prayer to St. Michael.

Michael is a very powerful archangel. With his guidance we can fight the evil in our life. Praying for his guidance fills us with courage and self-confidence.[/vc_column_text][/vc_column][vc_column width=”1/4″][vc_raw_html]JTNDc2NyaXB0JTIwYXN5bmMlMjBzcmMlM0QlMjIlMkYlMkZwYWdlYWQyLmdvb2dsZXN5bmRpY2F0aW9uLmNvbSUyRnBhZ2VhZCUyRmpzJTJGYWRzYnlnb29nbGUuanMlMjIlM0UlM0MlMkZzY3JpcHQlM0UlMEElM0MlMjEtLSUyMGd1YXJkaWFuYW5nZWxndWlkZS5jb20lMjAtLSUzRSUwQSUzQ2lucyUyMGNsYXNzJTNEJTIyYWRzYnlnb29nbGUlMjIlMEElMjAlMjAlMjAlMjAlMjBzdHlsZSUzRCUyMmRpc3BsYXklM0FpbmxpbmUtYmxvY2slM0J3aWR0aCUzQTMwMHB4JTNCaGVpZ2h0JTNBNjAwcHglMjIlMEElMjAlMjAlMjAlMjAlMjBkYXRhLWFkLWNsaWVudCUzRCUyMmNhLXB1Yi0yMjM4MTAyMDk0ODYxNzk1JTIyJTBBJTIwJTIwJTIwJTIwJTIwZGF0YS1hZC1zbG90JTNEJTIyMTEyMjQyNjg2MSUyMiUzRSUzQyUyRmlucyUzRSUwQSUzQ3NjcmlwdCUzRSUwQSUyOGFkc2J5Z29vZ2xlJTIwJTNEJTIwd2luZG93LmFkc2J5Z29vZ2xlJTIwJTdDJTdDJTIwJTVCJTVEJTI5LnB1c2glMjglN0IlN0QlMjklM0IlMEElM0MlMkZzY3JpcHQlM0U=[/vc_raw_html][/vc_column][/vc_row]