Home / Celestial Hierarchy / Cherub – What Is A Cherub ?

Cherub – What Is A Cherub ?

What Is A Cherub ?

A Cherub or Cherubim is a celestial being that lives close to God. Abrahamic religions believe that the Cherub’s main responsibility is to guard the Garden of Eden. “De Celesti Hierarchia” is the first sacred scripture that describes cherubim as a king of angel. They are depicted differently by different religions. Therefore, Jews depict them as young children with wings. But Christians see them as celestial beings with numerous wings. But they also have numerous heads. They have a head of a lion, an ox, an eagle and a human. The human face is in the center, the other three surrounding it. But they are very often associated with the so called “puttos”. Which are playful small baby boys with wings. Such as Cupid. 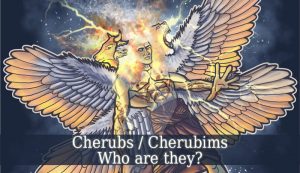 In Christianity, Cherubim occupy the second highest rank in the celestial hierarchy. Above them we can find the Seraphs. Therefore, Cherubs are on the second place of the nine branches of the angelic hierarchy. Some example of cherubim angel names are: Gabriel, Cherubiel, Ophaniel or Ofaniel, Rikibiel, Zophkiel and Raphael.

They are the most popular in the Hebrew Bible. The Hebrew name of the celestial beings ( כְּרוּב‎‎ ) is mentioned non less then 91 times. The Hebrew Bible describes them as guardians of the path to the Tree Of Life. But they also appear in The Bible as transporters of Yahweh’s throne. Ezekiel describes the Cherubim as having four faces (human, lion, ox and eagle) in the first chapter. But in the 11th chapter he makes a little change. He mentions three faces as in the first chapter (human, eagle and lion). But the fourth face he describes as “the face of a Cherub”. Cherubim are mentioned and highly adored in Jewsh Mysticism. The appear many times in the Zohar. And they have powerful mystical roles in the Kabbalah.

They are not mentioned by name in the sacred texts of Islam. But they are present in the Islamic traditions. Therefore, the cherubim, in Islam, are the celestial beings who support God’s throne. Being very close to God, they ask him to bless, forgive and protect those who believe in him. In Islam, Gabriel is the ruler of the Cherubim.

Share
Previous Seraph Seraphim – What Is A Seraph?
Next Guardian Angel Yeyaiel