Demonic Angel Leviathan – the fallen angel. Firstly, his name means “That Which Gathers Itself Together In Folds”. He is one of the evil angels who rules over the deep of seas.

The Demonic Angel Leviathan is a demonic angel. He is often depicted as a sea monster. Or a a huge whale. He is the sea demon that destroys ships and others. Leviathan is often mistaken with Rahab, the angel of seas. But also with Behemoth, who has been created on the same day. Leviathan swallows up very soul excepting the pure ones. Therefore, he is the ultimate punisher. 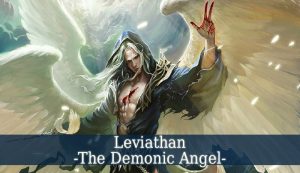 Enoch mentions Leviathan’s name as a female sea dragon and evil monster. In sacred Rabbinic texts, Leviathan is often confused with Rahab. Because they have about the same responsibilities. To rule over the primordial deep or the deep seas. These texts also confuse Leviathan with Behemoth. Because they both were created on the 5th day.

Job mentions Leviathan’s name in Job 41:1 as a huge evil demonic sea creature. He continues the verses by describing the demon’s physical appearance. Job describes him as “the mere sight of it is overpowering”. He continues the description mentioning his limbs, strength and graceful form. Leviathan is huge. And he is covered in a double coat of armor. He has a huge moth and fearsome teeth. Also, his back is covered in rows of shields. Job continues to describe his snorting, which throws flashes of light. And his eyes look like the rays of dawn. His moth streams flames and sparks of fire. And smoke comes out of his nose. The Demonic Angel Leviathan‘s chest is hard as rock. And impenetrable.

Isaiah calls Leviathan the “crooked serpent” in Isaiah 27:1. And Jonah describes him as the huge whale which keeps Jonah in his belly for 3 days. Until God orders the creature to vomit Jonah out.

Leviathan also appears in a Jewish legend, alongside with Behemoth. This legend has 2 version. The first one describes how the two demons murders each other. And another version, describes God sending Michael and Gabriel to fight the two evil demons. But the demons seem too powerful. So God fights them himself.