Guardian Angel Azrael – also called Ashriel, Azrail, Azriel, Azariel and Sariel. He is The Angel Of Death. Firstly, his name means “Vow Of God” or “Whom God Helps. Azrael is one of the 7 divine angels with dominion over the Earth.

Guardian Angel Azrael is the angel of death, due to Islamic and Jewish beliefs. He separates the souls of dying people from their body. But Azrael is not the only one angel of death. The others are: Metatron, Abbadon, Hemah, Kafziel, Leviathan, Kezef, Mashit and Yehudiah. Each one of these Angels of Death have their own task. Therefore, Azraels’s main responsibility is to keep his hands stretched out so he receives the souls of those who do evil. 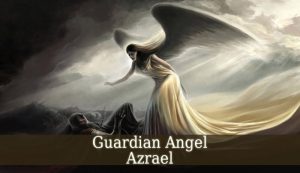 The Koran describes Azrael as one of the 4 archangels, next to Jibril, Michael and Israfil.

In Merkabah traditions, Enoch describes Archangel Azrael as one of the Angels of destruction. Also called “Swords Of God”. Therefore, he has two important missions as the angel of destruction: to punish the wicked and to purify the souls in Hell. The prophet also describes that The Angels Of Destruction stay facing God on the Judgment Throne in the heavenly court.

Guardian Angel Azrael is the divine angel of death. He often materializes to the dying ones. Taking a form that mostly pleases the dying. So they take their last breath amazed by the angel’s beauty. So the dying falls instantly in love. And his soul detaches from the body as if it was seduced. Sometimes he doesn’t even materialize. And he appears as a scent depending of the purity of the soul. If the dying was a good man, he feels a pleasing smell. But if he did evil, he feel a very bad smell. Due to the sayings of Abdul Karim Jili, a Sufi teacher.

It is believed that Guardian Angel Azrael appeared at the death bad of Rumi, the Sufi poet. He appeared to every people at the poets bed. They were all filled with fear. But Rumi invited him inside politely.

Guardian Angel Azrael is described as having 70,000 feet, 40,000 wings and eyes and tongues for every people on Earth. But in Arabic Mythology he is often depicted as writing and erasing from a large book. It is The Book Of Life. Every new writing symbolizes birth. And every erasing symbolizes death.

Share
Previous Guardian Angel Adnachiel
Next Angels Of The Months