Guardian Angel Cherubiel – also known as Kerubiel. He is the prince of the order Cherubim since the Creation. Also, Cherubiel is one of the most exalted angels of Heaven. 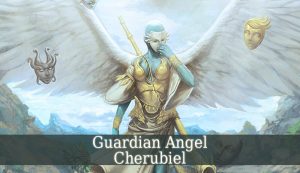 Cherubiel appears in The Book Of Enoch. The prophet describes him as the ruler of the order of cherubim. But Enoch also describes his physical appearance. Which is unique. Because he is as tall as 7 Heavens. His body is comprised of burning coals. And it is entirely covered with thousands of eyes. The prophet continues describing Cherubiel’s face, which is covered in fire. Also, his eyes spark of light and his lashes are lightning bolts. The angel spews fire with every word he says. And he is also covered in wings from head to the toes. Enoch also describes how horrifying the surroundings become when he appears. Because Guardian Angel Cherubiel is accompanied by lightning, thunder and earthquakes everywhere he goes.

The Prophet Enoch also mentions that the crown of holiness is the Cherubiel’s head. And also, the bow of the so called Shekinah is between his shoulders.