Guardian Angel Hadraniel – also called Hadariel, Hadriel and Hdarniel. Firstly, his name means “The Majesty Of God”. And he is the angel of love. Guardian Angel Hadraniel stands at the second gate in Heaven. And he is also one of the guardians of the Gates Of The East Wind. As physical aspect, he is taller then angel Kemuel (Angel Jehoel), but shorter then Sandalphon. 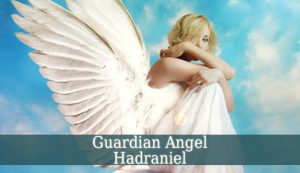 Moses describes his meeting with Hadraniel. He describes that the appearance and power of the angel left the prophet “struck dumb with awe”. But then Moses speaks the “Supreme Name”, which makes Hadraniel tremble.

In the Zohar, Adam also met Hadraniel, 2000 years before, Moses did. Hadraniel was the angel sent by God to Give Adam The Book Of The Angel Raziel. And told Adam to keep the sacred book secret. Even from the celestial creatures.

The Zohar III describes how powerful Hadraniel’s voice is. Because when he proclaims the will of God, his voice is so powerful that it penetrates “200,000 firmaments”.

In Gnosticism, Hadraniel is one of the 7 subordinates of Archangel Jehuel. Also known as The Prince Of Fire.

Also, The Sefer Ha-Heshek describes Hadraniel as one of the many names of Metatron. Therefore, the angel is often identified as Metatron.

Guardian Angel Hadraniel is the divine angel of love. Just like Archangel Chamuel. His main responsibility is to share the unconditional love of God. He awakens self-love inside of you. Hadraniel also awakens the 3 so called Ascension Attitudes within you. These attitudes are: love, gratitude and surrender.

Hadraniel is the divine angel who guards you when you are in pain. He listens to your problems and takes care of the pain in your heart. But he also helps you to identify your fears and negative emotions. Which attitudes keep you from loving yourself and others.