Guardian Angel Hanael – also known as the angel of air. His name means “Grace of God” or “Joy Of God”. But he has other names such as Anael. And he rules over the Planet Venus. Hanael is a Dominion. And he protects those who were born under the zodiacal sign of Capricorn.

Guardian Angel Hanael is the divine angel of air. Therefore, he creates and controls the wind. But he is also the angel who breaths air into the human body. Hanael breaths vitality, thirst for life, energy and optimism into your body. Pray for his guidance when you experience lack of action and courage. He fills you with self-confidence and joy. 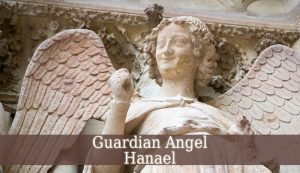 Hanael is also the angel of intellectual activity. Therefore, he is a great ally in learning, studying and discovering new or sacred knowledge. Hanael brings spiritual and material wealth. The spiritual wealth is most easily achieved by practicing a spiritual work.

Hanael is one of the seven divine angels of creation. He is the ruler of the 2nd heaven. One of his main responsibilities is to ascend the prayers from the 1st heaven. Hanael is the Sacred Warrior. He inspires us to master our willpower. He fills us with humility, strength, courage and integrity. Hanael brings a sense of purpose into our lives.

Hanael is also the angel of joy (just like Archangel Haniel and Angel Ramiel) and pleasure. He brings beauty into our lives. And he is also the patron of nature. He brings harmony and peace. Hanael also brings spiritual experience. And he has an interesting connection with our karma. Therefore, he reveals us our karma. And the best ways to erase it. Guardian Angel Hanael‘s main colors are: purple, emerald green. He is usually depicted in a human form. With emerald green robes and a big joyful smile on his face. Also, he is depicted sometimes holding a rose or a thyrsus.