Guardian Angel Kokbiel – also known as the angel of constellations. You can also find him under other names such as Kochbiel or Kajabiel. His name means “Star Of God”. He appears in different sacred texts, which talk differently about him.

Guardian Angel Kokbiel is the divine angel of planets, constellations and astrology. He has some disturbing dual reputation. This is the result of his appearance in two different sacred texts. The first sacred text that we find Kokbiel in is The Book Of Enoch. 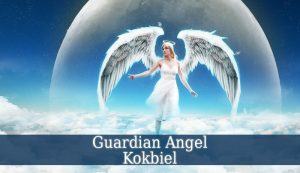 But in The Book Of The Angel Raziel ( Hefe Raziel) Kokbiel is one of the holy angels. A celestial being.  He is honored and loved by God. His main responsibility given by God is to come to Earth and share his astrological knowledge. Therefore, he brings knowledge about the planets and the constellations.

Kokbiel is generally seen as a fallen angel. Another apocryphal text says that he commands and army of 365,000 spirits. Other sacred texts say that the army consists of holy angels, not spirits.

But, truly, he is a holy angel. He is the angel of stars. Therefore, he is the patron of astrologers, astronomers and cosmic psychics. Kokbiel is the celestial astrologer. But he is also the Ruler of Earth and every planet and constellation. He maintains the harmony of every cosmic body in the universe.