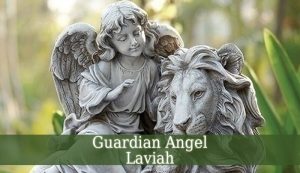 Guardian Angel Laviah brings revelations. Just like Angel Ariel or Angel Sabrael. He enhances your intuition. Therefore, you will be able to understand the spiritual world just using your powerful intuition. Laviah is a fighter. He fights against the sadness within your soul. But he also fights against the torment of others. Guardian Angel Laviah holds and reveals sacred knowledge about the Universal and Cosmic Laws. He sends you revelations through your dreams. These revelations come when you dream at night, daydream or even when you meditate. But Laviah also brings unconditional joy. And he has the ability to help your spiritual ascending. Laviah is the patron of transcendental music, philosophy and poetry.

Guardian Angel Laviah and his influence upon you

The days between June 11 and June 15 represent the influential period of Guardian Angel Laviah. So, if you were born in this period, then you are influenced by the angel of revelations. Therefore, you genuinely understand revelations and symbols. You decode naturally any message or dream. But you posses psychic abilities too. Your guardian angel will help you to control and use them. You love everything around you. And you believe in the power of love. You know that it can help you achieve anything in your life.

You sense the sadness of others. But you also know how to take it away and to replace it with joy. You radiate joy from your aura. The bright light of joy that you hold will touch everyone you meet. Also, you are very attracted by spirituality and philosophy. But poetry, music and arts are important too for you. You study, read and learn all your life due to the influence of your guardian angel.

Guardian Angel Laviah helps anyone in need. He takes away the sadness in your heart. And he brings pure joy. But he also helps you to use your intuition more often.