Guardian Angel Rachmiel – also known as the angel of mercy. He belongs to the group called Angels Of Mercy. Who stay at the right side of God, in The Heavenly court of law, situated in the 7th Heaven. The other Angels of Mercy are: Uzziel, Rhamiel, Gabirel, Michael, Archangel Zadkiel and Zehanpuryu. Also his name means “The Mercy Of God”. And his belongs to the choir of angels called Hashmalim. 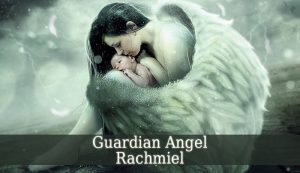 Rachmiel or Rahmiel is also a great ally in protection. He is a great and powerful protector. You can invoke him to protect yourself and your family. But he is also very often invoked to protect pregnant women, the unborn child in the womb and the newborn infants. Guardian Angel Rachmiel blesses the process of giving birth. And he also blesses the little child.

Rachmiel also holds sacred knowledge about astrology. With his guidance you will find out more about the celestial creatures. And he also holds the knowledge you need to transcend to the Heaven. Such as Abraham and Sarai did.

Rabbinic sacred texts mention Rachmiel as the angel of mercy.

The Ozar Midrashim II describes Rachmiel as one of the celestial guards of the Gates of The East Wind.