Guardian Angel Sealtiel – also called the Archangel of Adoration. Firstly, his other names are: Sealthiel, Salatheel and Salathiel. His name means “Request Of God” or “Prayer Of God”. He is one of the 7 archangels who rule the movement of the spheres. 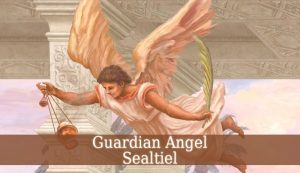 Guardian Angel Sealtiel is the divine angel of prayers. He brings incense to the altar of God. And facilitates the saints prayers. He also brings our prayers to the Golden Altar. Due to his responsibility to take our prayers to God, he became the Archangel of Adoration. Sealtiel is the divine messenger. He improves our connection with the divine. He teaches us to pray properly. Sealtiel fills us with gratitude for every gift from God. With his guidance, we live a beautiful life with God in it. Sealtiel teaches us how to adore The Divine. He is the divine angel of contemplation and worship. Therefore, he cleanses our souls to become receptive for God’s blessings. Guardian Angel Sealtiel interprets your dreams and visions. He helps psychics to interpret their visions easier.

Sealtiel is believed to be the angel who stopped Abraham from the horrific act of killing his own son. As described in Genesis. But there other sources too. In Apoc 8: 3-4 we find him as a incenser. He brings the incense to the saints praying at the Golden Altar, at God’s throne. Due to this passage, Sealtiel is often depicted as holding incense.

The Book Of Adam And Eve depicts Sealtiel, alongside with Suriel, as the celestial beings who conduct Adam and Eve from the top of the high mountain. Satanel himself lured Adam and Eve to the mountain. And Sealtiel takes them to the cave of treasures. The Book of Adam and Eve calls him Salatheel.

But Sealtiel is not just an ordinary angel. The Enochian writings mention him as an archangel. He is also believed to be the angel of Repentance. He appeared to Hermas as a shepherd. Then Sealtiel interpreted his visions. As result, Sealtiel remains Hermas’ guardian angel. He also appears in the 4 Ezras. Those texts call Ezra Salathiel.